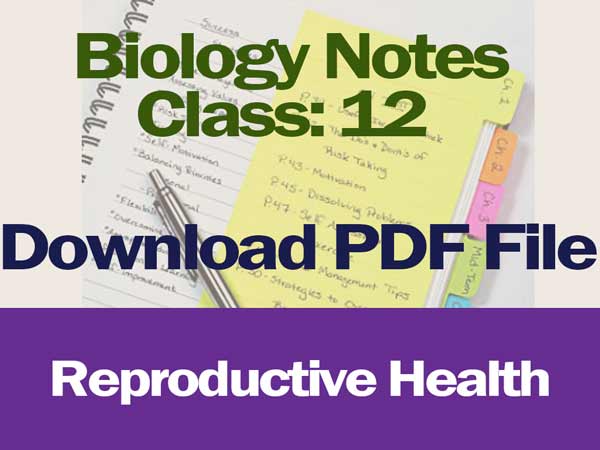 According to the World Health Organisation (WHO), reproductive health means total wellbeing in physical, mental, emotional, behavioral and social aspects of reproduction. A reproductively healthy person is one who has physically and functionally normal reproductive organs and normal behavioral and emotional interactions with other persons in all sex-related aspects.

The government of India initiated a number of programs at the national level to attain total reproductive health as a social goal. Family planning was one such program initiated in 1951. These are popularly termed as Reproductive and Child Health Care (RCH) programs. Sex-education in schools and governmental and non-governmental agencies to help in creating awareness about reproduction related aspects.

The main aim of such programs is to create awareness among people about reproductive organs, adolescence and associated changes, safe and hygienic sexual practices, sexually transmitted diseases (STDs), social evils like sex-abuse and sex-related crimes, etc, and providing facilities and support for building up of reproductively healthy society.

Maternal and Child Health (MCH) services and family planning are the important programs of health care centers under which people are educated about available birth control options, care of pregnant mothers, post-natal care of the mother and the child, the importance of breastfeeding, equal opportunities for the male and the female child.

At present, the human population is increasing at a rate of over two persons every second or about 2,00,000 people every day. Such a rapid or exponential increase in population is termed population explosion. Reasons for this are –a rapid decline in maternal and infant mortality rates, increased health facilities, early marriage, lack of social awareness, etc. Reduction in birth rate is the only practicable and direct method to control the world’s population.

The regulation of conception by preventive methods or devices to limit the number of offspring is called birth control or contraception.

These are of two types: combined pills and mini pills. Combined pills are the most commonly used contraceptive pills that contain synthetic progesterone and estrogen to check ovulation. Mini pills contain progestin (progesterone-like synthetic hormone) only.

Oral contraceptive pill, Saheli contains a nonsteroidal preparation called centchroman which is taken once a week after an initial intake of twice a week dose for three months.

The most common form of an emergency contraceptive is a kit consisting of a high dose of birth control pills. These kits can prevent pregnancy within 72 hours after unprotected sexual intercourse.

Both vasectomy and tubectomy are very effective methods but reversibility is very poor.

MTP is comparatively safe up to 12 weeks of pregnancy. The government of India legalized MTP in 1971. At present, MTP is legally allowed up to the 28th week of pregnancy if the family physician and the gynecologist considers the need for abortion. It also plays a significant role in decreasing the human population.

There are also some drawbacks to MTP. It is being misused to abort the normal female fetuses and has raised many emotional, ethical and social issues too.

The inability to conceive or produce children in spite of unprotected sexual intercourse is called infertility.

It is caused by various reasons which can be grouped under physical, congenital, immunological or even psychological disorders.

The transabdominal aspiration of fluid from the amniotic sac of the fetus is called amniocentesis. It is a fetal sex determination and disorder test based on the chromosomal pattern in the amniotic fluid surrounding the developing embryo.

Unfortunately, this useful technique is being misused to kill the normal female fetuses. Therefore, it is legally banned.

In Chorionic Villi Sampling (CVS) technique the physician inserts a narrow, flexible tube through the mother’s vagina and cervix into the uterus and withdraws a small amount of fetal tissue (chorionic villi) from the placenta.

The rapidly dividing chorionic villi cells can be used for karyotyping along with some biochemical tests.

One of the widely used non-invasive techniques to determine the fetal condition is ultrasound imaging.

Foetoscopy is a technique in which a needle-thin tube containing a viewing scope is inserted into the uterus, giving the physician a direct view of the fetus.

What is a molecule’s easy definition? || What are examples of molecules?

What Helium is Used for || Helium Isotopes || How is Helium Made