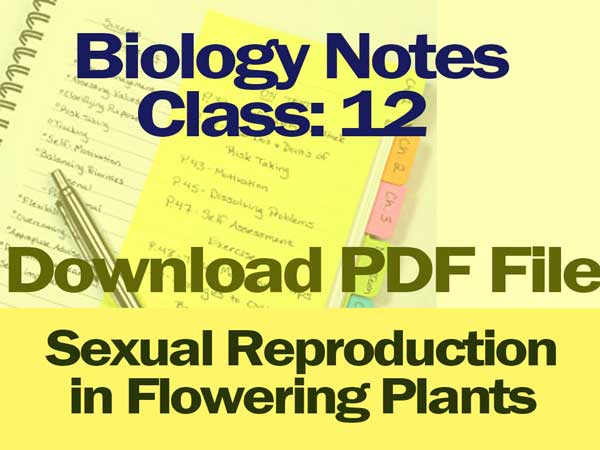 Sexual Reproduction in Flowering Plants: Sexual reproduction is the formation of new individuals through the meiotic gamete formation and their subsequent fusion during fertilization. It is also called amphimixis.

The flower is a specialized condensed shoot meant for carrying out sexual reproduction. It bears floral leaves and gives rise to seeds and fruits.

A typical flower has 4 whorls of floral leaves viz.,

Androecium consists of stamens as its units. The stamens or microsporophylls are regarded as the male reproductive organs of the flower.

Each stamen consists of three parts – Filament, anther, and connective.

The filament is the slender stalk of the stamen, and the anther is the expanded head, borne by the filament.

Each anther consists usually of two lobes connected together by a sort of midrib known as the connective.

Epidermis: One cell thick and protective in function.

Endothecium: Single layered, cells have cellulose thickening with a little pectin and lignin in some cases. It helps in anther dehiscence.

Middle layers: 1-3 layers; they degenerate during the maturity of the anther.

Tapetum: Tapetal cells are nutritive. By these cells, the Ubisch bodies are produced which help in the ornamentation of microspore wall.

The process of formation of microspores from sporogenous tissue is known as microsporogenesis.

As the anther matures and dehydrates, it dehisces by slits and pores to liberate the pollen grains.

Pollen grain (microspore) is the first cell of the male gametophyte.

Wall or covering of pollen grain is called sporoderm. It has two layers, outer exine, and inner intine. The outer layer exine is thick and sculptured or smooth. It is made up of sporopollenin which is resistant to chemical and biological decomposition so the pollen wall is preserved for long periods in fossil deposits.

At certain places, the exine remains thin. These thin areas are known as germ pores when they are circular in outline and germinal furrows when they are elongated. The intine is thin and elastic. It emerges out as the pollen tube from the germ pores during germination.

Development of male gametophyte is precocious, that is, it begins inside the microsporangium or pollen sac.

The size of the nucleus increases and protoplast then divides mitotically to produce a bigger vegetative or tube cell and a smaller generative cell.

The tube cell has a vacuolate cytoplasm which is rich in food reserve cell organelles and large and irregular nucleus.

The generative cell is small, spindle-shaped to spherical-shaped, with thin dense cytoplasm and a prominent nucleus.

Male gametes are formed by a mitotic division in a generative cell.

The gynoecium is a female reproductive whorl of the flower. It is composed of one or more carpels or pistils.

A pistil has a terminal receptive disc-like stigma, a stalk-like style and a basal swollen ovule bearing part called the ovary. Inside the ovary are the ovarian cavity (with one or more locules) and parenchymatous cushion called the placenta, from which arise ovules.

An ovule or integument megasporangium develops from the base or the inner surface of the ovary. It is small, generally an oval structure and consists chiefly of a central body of tissue, the nucellus, and one or two integuments.

Each ovule is attached to the placenta by a small stalk called the funiculus.

The place of attachment of the funiculus with the main body of the ovule is called the hilum.

In a typical (anatropous) ovule, the funiculus is fused with the body of the ovule lengthwise beyond the hilum. It gives rise to a longitudinal ridge called raphe. Funiculus contains a vascular strand for the supply of nourishment to the ovule.

The ovule contains a mass of thin-walled parenchymatous cells called nucellus. The nucellus is protected by one or two multicellular coats called integuments. The basal portion of the nucellus from where the integuments appear is called chalaza. A small opening isle at the apex of integuments known as micropyle.

Embryo sac or female gametophyte is embedded in the micropylar half of the nucellus. This makes the most important part of the mature ovule. It is the embryo sac, which bears the embryo later on.

Formation of megaspore (n) from megaspore mother cell (2n) by meiosis inside the ovule is called megasporogenesis.

Only one megaspore mother cell remains functional and the other 3 degenerates. This functional megaspore develops into a female gametophyte. This method of embryo sac formation from a single megaspore is called monosporic development.

Out of 8 nuclei, 4 nuclei are arranged at each pole. One nucleus from each pole migrates to the center to form two polar nuclei which further fuse to form a diploid or secondary nucleus.

Thus a typical angiosperm embryo sac, at maturity, though 8-nucleate is 7 celled with 3 micropylar, 3 chalazal and one central cell.

Pollination refers to the transfer of pollen grains from the anther to the stigma of a flower. It is of two types: self-pollination and cross-pollination.

Pollen – pistil interaction is a safety measure to ensure that illegitimate crossing does not occur.

It checks the promotion or inhibition of pollen growth. Pollen grains of a number of plants may settle over a stigma but only the right pollen belonging to the same species would germinate while others fail to do so.

Pollen-pistil interaction determines the suitability of pollen for carrying out the process of sexual reproduction.

It has freed the seed plants from the dependence on external water during fertilization.

It can be manipulated to produce pure lines as well as desired varieties.

The fusion of male and female gamete is called fertilization.

The fertilization involving the formation of the pollen tube as in seed plants is called siphonogamy.

On reaching the ovary, the pollen tube grows towards one of the ovules.

The events of endosperm and embryo development, maturation of ovule(s) into seeds and ovary into fruit, are collectively termed as post-fertilization events.

As a consequence of triple fusion in which a male gamete fuses with the secondary nucleus, a triploid structure called primary endosperm nucleus (PEN) is formed that divides by mitotic divisions and forms a mass of nutritive cells called the endosperm.

After fertilization, the fertilized egg is called zygote or oospore which develops into an embryo.

This process of development of the embryo is called embryogenesis.

The oospore before entering the process of embryogenesis undergoes a period of rest which may vary from a few hours to a few months.

The embryo develops at the micropylar end of the embryo sac where the zygote is situated. Most zygotes divide only after a certain amount of endosperm is formed.

A typical dicotyledonous embryo consists of an embryonal axis and two cotyledons. The part of the embryonal axis above the level of cotyledons is called epicotyl. It terminates with the stem tip, called plumule (future shoot). The part below the level of cotyledons is called hypocotyl which terminates in the root tip called radicle (future root). The root tip is covered with a root cap (calyptra).

In monocotyledons, there is only one terminal cotyledon situated towards the lateral side of the embryonal axis called scutellum (shield-shaped) e.g., grass family. At its lower end, the embxyonal axis has radicle and root cap enclosed in an undifferentiated sheath called coleorhiza.

The part of the axis above scutellum attachment is called epicotyl. It has shoot apex and few leaf primordia enclosed in a hollow foliar structure called coleoptile. The early development of dicot and monocot embryos is similar up to the globular stage.

Ripened ovules are known as seeds. A true seed is defined as a fertilized mature ovule that possesses an embryonic plant, stored food (sometimes absent) and a protective coat or coats.

Funiculus (stalk of ovule) forms stalk of the seed. Ultimately, stalk withers and leaves a minute scar called hilum. Antipodals, synergids disorganize and nucellus may disappear or persist as perisperm.

The fruit is a seed containing part of a plant that develops from a fertilized ovary and often from other tissues that surround it.

A pseudocarp or accessory fruit or false fruit is a fruit whose _esh is derived from the ovary, along with some other floral parts like the thalamus, e.g., apple, strawberries.

A eucarp or true fruit is a fruit that is developed only from the ovary after fertilization, e.g., mango.

The wall covering the fruit is called the pericarp. It consists of three parts:

Epicarp called the skin of fruits.

Endocarp, the innermost portion that surrounds the seeds.

If you want to download Chemistry notes PDF file Links are given below.