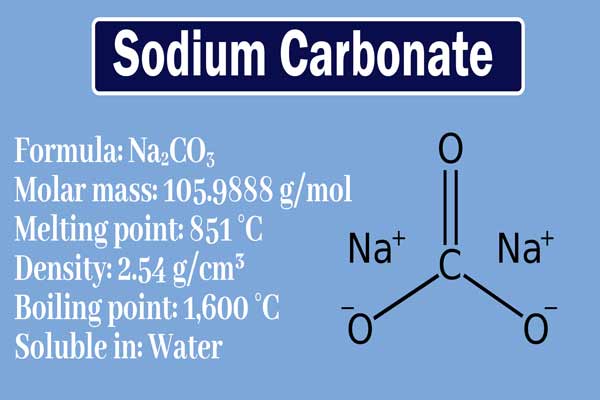 In nature, it is found in the form of gentle soil and mortar. The percentage of sodium carbonate in these substances varies from 20 to 50%. There are two main methods of industrial construction.

In this method, sodium sulfate is made by heating sodium chloride with sulfuric acid.

Sodium carbonate is formed when sodium sulfate is heated with carbon and Calcium Carbonate(CaCO3).

This method divided into deferent steps

This mixture is heated by taking an aqueous solution of ordinary salt in iron Pan and the appropriate amount of concentrated sulfuric acid. Sodium sulfate is removed by the action of sodium chloride and sulfuric acid. And the vapor of HCl is obtained. Thus the HCl obtained, merges into the cold water to form of HCl acids. On more heating the mixture, the remaining amount of sulfuric acid decomposes and separates into a vapor. And sodium sulfate is obtained as a hard solid. This hard solid is called salt cake.

The salt cake is broken into small pieces and heated in a revolving furnace with limestone(CaCO3) and cok(C). And becomes sodium carbonate. The mixture obtained from this furnace is called black ash.

Sodium carbonate is a white colored solid. Its melting point is 8500C. It is a fusion of water. Upon concentration of its aqueous solution, crystals of sodium carbonate are obtained. When kept open in the air, most of its crystal water enters the atmosphere and forms Na2CO3.H2O. Na2CO3 is also called soda ash and Na2CO3.H2O is also called Washing soda.

Acting with acids: Being alkaline, it reacts with acids to form their corresponding salts. This reaction is completed in two terms.

Effect of heating: Crystallization water is separated by heating the crystalline of sodium carbonate. It melts when heated. But does not decompose.

Salts of some metals precipitate their hydroxide upon adding sodium carbonate to the aqueous solution.

Some metals salts have their organic precipitates when it is added to an aqueous solution.

The aqueous solutions of these salts are heated with sodium bicarbonate to form carbonates of these metals.