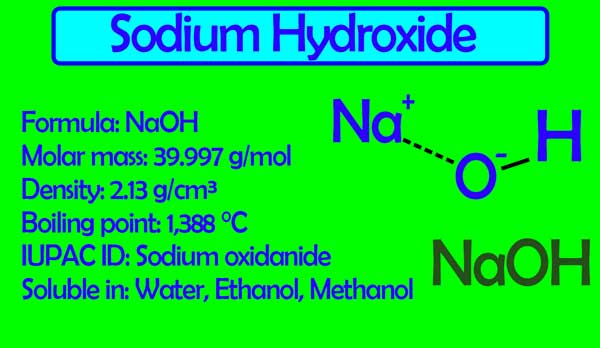 This obtained sodium oxide has calcium carbonate inaccuracy. It is estimated by pulsing hydrochloride acid in one part of it. How much calcium carbonate is left in it. Then, by adding the appropriate amount of hot water to its aqueous solution, by heating it and then filtered, pure sodium Hydroxide is obtained in the filtered solution. It is obtained in solid form after vaporizing an aqueous solution of sodium oxide.

The complete and balanced equation of the reaction is as follows.

Sodium hydroxide solution accumulates in the vessel placed under the perforated cathode. This solution contains sodium chloride as impure. Which is overcome by fractional crystallisation.

Like the nelson cell, this cell is also used for the industrial manufacture of sodium hydroxide by the legal decomposition of an aqueous solution of sodium chloride.

A cathode made of iron leaves is inserted in the middle part and graphite sticks are immersed in the solution of the outer part. Which acts as an anode.

A layer of mercury is formed on the bottom of the vessel. Those who remain in contact with all the three parts of the vessel, the solutions filled in these parts are not in contact with each other. The layer of mercury can be rotated with the help of a concentric wheel so that the Na+ formed in the left and right chamber can be periodically brought into the middle chamber with the help of the mercury layer.

Sodium-ion(Na+) and chloride ion(Cl–) are present as a result of the ionization of sodium chloride in the outside portions of the vessel. When electrically flowing between electrodes, chloride ions go to the anode to form chlorine gas.

This cell is the modified form of the Castner-Kellner Cell. In this, a six anode of graphite and about 1/3” thick surface of mercury acts as a cathode. During electrical decomposition, the surface of the mercury flows slowly from one side of the vessel to the other.

Sodium and chloride ions are obtained as a result of the ionization of sodium chloride.

Chloride ions from chlorine gases at the anode.

Sodium ions from an amalgam with mercury.

Sodium hydroxide is obtained by reacting the sodium mercury amalgam obtained from the cell with water.

It is a white-colored solid material. Being deliquescent, it has the ability to form a solution by absorbing water vapor from the air. Therefore, after leaving open in the air, after some time, drops of fluid appear on its surface. Its melting point is 3180C and Boiling Point is 1,388°C. It is a fusion of water and alcohol. It is also called Caustic Soda. It puts painful blisters on the skin. Its aqueous solution resembles a soap solution. It is a strong base.

It absorbs air moisture and carbon dioxide when kept open in the air. By absorbing the water vapor of air, it forms a saturated aqueous solution of sodium dioxide. And by absorbing carbon dioxide, sodium carbonate is formed.

When overheated, it disintegrates into its contents.

It is a strong base. And salt is formed by reacting with acids.

It also forms salts by interacting with acidic oxides.

It reacts with some metals to form their salts. And hydrogen gas decomposes.

The action of Sodium dioxide with bromine and iodine is similar to that of chlorine.

When heated with sulfur, it forms sodium thiosulfate.

On heating with phosphorus, it forms sodium hypophosphite and phosphine gases.

On heating with ammonium salts, it forms ammonia gas.

Some metals precipitate their hydroxides upon mixing with salts in an aqueous solution.

The hydroxide of zinc and aluminum dissolves in excess of NaOH to form sodium ginket and sodium perminate, respectively.

Use of Sodium Hydroxide

It is used in making various inorganic and organic compounds. It is used to make alkanes from fatty acids. It is also used in the manufacture of phosphine and hydrogen.

It is used as a major reagent in the laboratory.

It is used in many industries like soap making, paper making, silk and rayon making, petroleum refining, and dyes making.

It is also used for purification of many substances after making them.

How to compose Cement? Cement Uses.

What are reagent agents || reagents in organic chemistry reactions

What is the use of plaster of Paris?