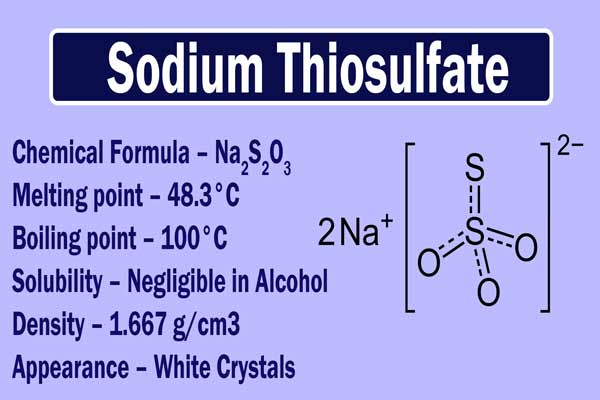 Sodium thiosulfate: At the beginning of the development of the chemical, the formula of this additive was considered Na2S2O4 and was named sodium hypo-sulfate. The short name is called Hypo. Later its formula Na2S2O3 was established. Due to its acronym hypo becoming more popular, its common name is still hypo today.

When an aqueous solution of sodium sulfide is boiled with sulfur, sodium thiosulfate is obtained. After filtering the solution and cooling it, monoclinic shaped crystals of Na2S2O3.5H2O are obtained.

Hypo is obtained when a mixture of sodium sulfate and sodium sulfide is reacted with iodine.

In this reaction, iodine is used in moderation. Otherwise, it reacts with the product to make another product.

By the reaction of sodium hydrogen sulfide and sodium sulfate

It is a colorless crystalline solid. Its melting point is 48°C. It is soluble in water.

Thermal Decomposition: By heating to 215°C, its crystallization water is separated.

At 220°C or higher temperature, it is decomposed into sodium sulfate and sodium pentasulfide.

Reaction with dilute HCl: It reacts with dilute acids to produce SO2 gas and the sulfur precipitate is obtained.

Action with Chlorin: By acting with chlorine, it forms hydrochloric acid. For this reason, it is called AntiChlor.

Action with iodine: It reacts with iodine to make NaI and sodium tetrathionate. Both these compounds are colorless, so the violet color of iodine disappears. This reaction is used in the quantitative analysis of iodine.

Action with silver bromide: Silver chloride, silver bromide, and silver iodide are insoluble in water but dissolve in an aqueous solution of sodium thiosulfate. The reason for this is that the reaction of silver halide and sodium Thiosulfate forms a hybrid salt called Sodium Argento Thiosulphate which is soluble in water.

After some time the pink color disappears due to the following reaction.

To make negatives in photography and to make positive

To overcome the excess of chlorine as Antichlor.

In quantitative analysis, titrations with iodine determine their amounts in solutions of oxidizers such as CuSO4, KMnO4, K2Cr2O7 etc.