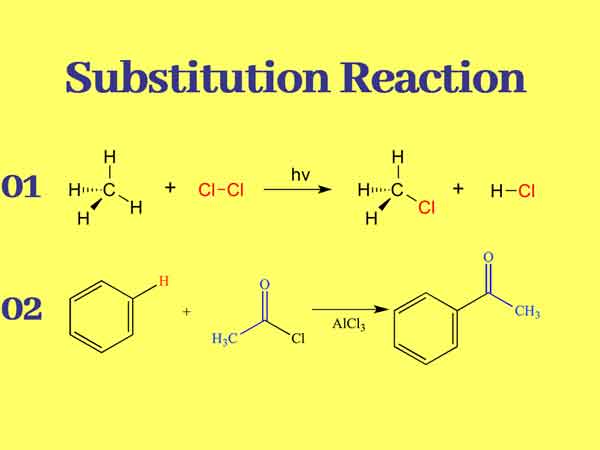 Haloalkanes are reduced to alkanes by lithium aluminum hydride , which is also the substitution of negative hydrogen ions for halogens in the reactants . When the nucleophilic atom of the reagent is carbon, a carbon-carbon bond is formed as a result of the substitution, thereby obtaining a carbon chain extension product, such as the reaction of a haloalkane with sodium cyanide, sodium alkynide or an enolate .

In the nucleophilic substitution reaction, the C-X bond is first broken to generate a carbohydrate ion and then react with the reagent to form a C-Y bond. This reaction is called a single-molecule nucleophilic reaction and is referred to as SN1.

The reaction that occurs when the C-X bond is broken and the C-Y bond is formed at the same time is called a bimolecular nucleophilic substitution reaction, denoted as SN2.

The process of SN1 is divided into two steps. In the first step, the reactants undergo bond cleavage (ionization) to generate the active intermediate carboions and leaving groups, in the second step, the carboions quickly combine with the reagents to become products.

The total reaction rate is only proportional to the reactant concentration, and is not related to the reagent concentration. SN2 is a cooperative process in which old bond breaks and new bond formation occur simultaneously.

The reaction rate is proportional to both the reactant concentration and the reagent concentration. Reactants that can generate relatively stable carbocations and leaving groups are prone to SN1, and reactants with small central carbon atom space barriers are prone to SN2. If the nucleophile is basic, the nucleophilic substitution reaction is often accompanied by an elimination reaction.

The ratio of the two depends on the structure of the reactant, the nature of the reagent, and the reaction conditions. Low temperature and weak alkaline are good for SN replacement

The nucleophilic substitution reactions of halogenated hydrocarbons are mainly of the following types:

In this case, RX + NaOH → ROH + NaX is often prepared by co-heating a halocarbon with an aqueous solution of potassium hydroxide or sodium hydroxide. The reaction can proceed completely because OH- is more nucleophilic than X-, the resulting hydrogen halide is neutralized by the base. Such as: Esterification of ethanol and acetic acid.

Reacts with sodium cyanide. Halogens react with potassium cyanide or sodium cyanide in an alcohol solution to form nitriles. In organic synthesis, it is often necessary to grow a carbon chain. The reaction of halogenated hydrocarbons with potassium (sodium) is one of the methods to grow a carbon atom. However, potassium cyanide (sodium) is highly toxic and requires special attention when used. Carboxylic acid (-COOH) and its derivatives can be synthesized through the conversion of nitrile group (-CN).

Reaction with organophosphorus. Halocarbons and trihydrocarbylphosphine effect obtained phosphonium salt, which loses a proton at a strong base to give a phosphorus ylide (ylide) or referred to by phosphorus YE Li (ylene). RCHX + RPRPCHRX where: X is I, Br, Cl, etc. R is alkyl or aryl. Phytolide is generally stable, but sometimes very lively. There are two kinds of limit expressions in terms of resonance expressions.

Referred to as SH (S stands for “Substitution” in English). It is a radical attack on an atom in the reactant molecule, which generates a reaction between the product and a new radical. This reaction is usually a chain transfer step of a free radical chain reaction. Some organic compounds will automatically oxidize in the air, and the process is also homolytic replacement. For example, benzaldehyde, cumene and tetralin can interact with oxygen to generate corresponding organic peroxides.

In addition, in addition to these normal reactions, sometimes the reagent can attack and replace the position of the original substituent, this situation is called in situ substitution.

SNAr requires certain conditions to proceed. Such as halogenated aromatic hydrocarbons are generally not prone to SNAr, but when halogen atoms are activated by ortho or para nitro groups, they are easily replaced.

Halogenated aromatics can also be substituted under strong base conditions. In addition, the aromatic diazonium salt becomes a stable molecular nitrogen due to the cleavage of the leaving group, which is conducive to the generation of phenyl cations, and a reaction similar to SNl can also occur.

Difference between addition and substitution

Addition reaction definition: The reaction in which unsaturated carbon atoms in organic molecules directly combine with other atoms or atomic groups to form new substances. Type comparison: From the point of view of the type of substance, it is similar to the chemical reaction.

Example: Take the reaction between CH2 = CH2 and Br2 as an example. The principle is that one of the double bonds in C = C is broken, and two Cs each form a half bond, which are respectively combined with two Br. The characteristic is that double bonds become single bonds, and unsaturated becomes saturated.

What does the catalytic Reaction do? ||catalytic reaction information