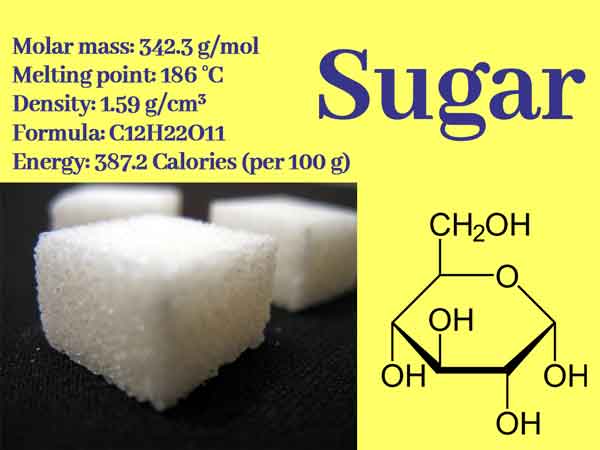 Carbohydrates are polyhydroxy (2 or more) aldehydes (Aldehyde) or ketones (Ketone) compounds, which can become one of the two organic compounds after hydrolysis.

Chemically, because it is composed of carbon, hydrogen, and oxygen elements, its chemical formula is similar to the polymerization of “carbon” and ” water “, so it is also called carbohydrate.

Carbohydrates are polyhydroxy aldehydes or ketones and can be divided into aldose and ketose accordingly.

Sugar can also be classified according to the number of carbon atoms triose (triose), chitosan (terose), pentose (pentose), hexose (hexose). The simplest sugar is Triose (glyceraldehyde and dihydroxyacetone).

Since most sugar compounds can be represented by the general formula Cn(H2O)n, sugars have been thought to be carbon and water compounds Called Carbohydrates. It is found that some sugars such as rhamnose (C6H12O5) and deoxyribose (C5H10O4) do not conform to the general carbohydrate formula.

In addition, the ratio of the number of hydrogen and oxygen atoms in the molecules of some organic compounds is exactly 2: 1, such as formaldehyde (CH2O), Acetic acid (C2H4O2), which meets the definition of carbohydrates, but not sugars. Therefore, it is not appropriate to call sugar a carbohydrate, but it has been used for a long time and is still used by people.

① sucrose, which is widely found in the roots, stems, leaves, flowers, fruits and seeds of plants, especially sugar cane and sugar beet, so it is named. A sucrose molecule is a condensation of a glucose molecule and a fructose molecule.

② Maltose, also known as caramel, has about half the sweetness of sucrose. The maltose molecule is formed by dehydration condensation of two glucose molecules.

(polysaccharide): formed by the condensation of hundreds or even tens of thousands of monosaccharide molecules, the general formula is (C6H10O5) n, the most important is starch and cellulose.

(Complex sugar, glycoconjugate): glycolipids , glycoproteins (proteoglycans), sugar-nucleotides, and the like.

(1) Provide energy. Both plant starch and animal glycogen are forms of energy storage.

Sugar includes sucrose ( brown sugar , white sugar, granulated sugar, yellow sugar ), glucose, fructose , galactose , lactose , maltose , starch, dextrin, and glycogen marshmallow. Among these sugars, except glucose, fructose, and galactose can be directly absorbed by the human body, the remaining sugars must be converted into basic monosaccharides in the body before they can be absorbed and utilized.

The main function of sugar is to provide thermal energy. Each gram of glucose is oxidized in the human body to produce 4 kcal of energy, and about 70% of the energy required by the human body is provided by sugar. In addition, sugar is an important substance that constitutes tissue and protects liver function.

Many researchers have confirmed that as long as you take the right amount, it is good for the human body to grasp the best time to eat good sugar. For example, when you take a bath, you need to sweat and consume a lot of energy, you need to add water and calories, and you can use sugar to prevent prolapse.

When you exercise, you need to consume heat. Sugar can provide heat faster than other foods. When you are tired and hungry, sugar can be quickly absorbed.

Increase blood sugar, when dizziness and nausea, eating some sugar can raise blood sugar to stabilize emotions and help to return to normal, eating sweet food after meals can make people study and work with energy and energy.

According to reports, experiments conducted by more than 1,000 elementary and middle school students in the United States show that after eating a few chocolates, only 2% of those who doze off in the afternoon or 1-2 sessions, compared with 11% of those who do not eat chocolate.

In addition, tests on hundreds of drivers found that when they were asked to eat chocolate, dessert, or sweet drinks every day at 2 pm, there were far fewer accidents.

Moderate consumption does not affect health

As more and more articles have been reported on the dangers of sugar to human health, some one-sided publicity has caused people to worry about eating sugar and feel “eating sugar is terrible.”

The U.S. Food and Drug Administration task force’s research on sugar concludes that sugar causes no other cause than caries. As part of a reasonable diet, eating sugar is just like eating other foods, as long as you consume the right amount, it will not harm your health.

According to the degree of refinement, source, form, and color of sugar, it can be roughly divided into the following categories:

The content of domestic granulated sugar is higher than 99.45%, and the moisture content is lower than 0.12%. It is divided into three grades of superior, first and second grade according to the standard, which are suitable for bread and pasta production.

2. Granulated sugar: It belongs to unrefined raw sugar, which has low purity, many impurities, large water content, and pale yellow color, such as domestic sugar No. 2 and imported Brazilian sugar and Cuban sugar.

3. White sugar: The crystals are small and uniform, the color is white, the texture is soft, the purity is lower than white sugar, the sugar content is about 98%, and the water content is less than 2%. Because of high cost, it is used for high-end food.

5. Brown sugar (table sugar, brown sugar): generally produced by the soil method, the most impurities, the lowest purity, but has its special flavor and fast coloring in baking, there are certain applications.

8. Glucose powder and glucose syrup: The glucose syrup is obtained from starch through enzyme catalysis or hydrolysis in the presence of an acid, and then spray-dried to obtain powdery glucose, generally containing 8% water.

9. Malt lumps and maltose syrup: Obtained from the effect of maltase on water produced by barley and wheat.

10. Inverted syrup: It is prepared by heating sucrose and water in the presence of hydrochloric acid. Its characteristics are low viscosity and good transparency. It is an essential ingredient for making Cantonese moon cakes.

12. Honey: The secretion and sweetness of plant nectary are high, 60% to 80% are simple sugars easily absorbed by the human body, and have a special flavor.

13 Molasses: When sugar is produced in a sugar factory, the mother liquor left after the syrup is concentrated has the most impurities. However, it has a special flavor and is often used in the production of whole wheat bread.

14. Caramel is a confectionery, boiled white sugar at a temperature close to or exceeding 115°C, so that it appears light yellow and almost brown, with caramel flavor, that is, caramel. Generally used only as a pudding. Eating more is harmful.