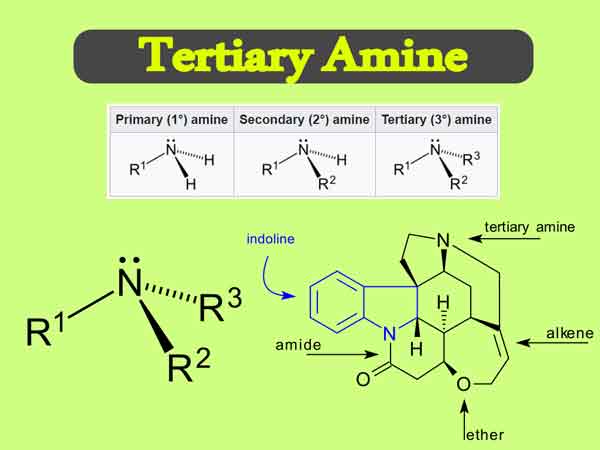 A tertiary amine refers to an amine having a trivalent group attached to three hydrocarbon groups in the molecule. Tertiary amines have a wide range of uses.

They can be used as components of formulated products and intermediate products of various specialized chemical derivatives. They are important raw materials for the production of quaternary ammonium salts.

Some Chemical compound we are using in this Post:-

The chemical absorption method is to take advantage of the acidic characteristics of CO2. It uses an alkaline solution for acid-base chemical reaction absorption and then realizes the regeneration of the solvent by means of a reverse reaction. Strong bases such as K2CO3, etc., although they can also be used as solvents and can be regenerated by heating, this solvent has severe corrosion on the system.

In the industrial chemical absorption method, an aqueous solution of organic alcohol amines is mainly used as an absorbent. A system consisting of an absorption tower and a regeneration tower is used to capture CO2.

Which compound is a tertiary amine?

Mixed amine absorbent solution can make use of the advantages of single-component organic amines, make up for the shortcomings, and the composite absorbent with high efficiency and low consumption is the development trend of absorbent.

MEA is the earliest and most widely used absorbent for industrial production. Optimizing MEA absorbent is one of the current concerns. As far as absorbent performance is concerned, “efficient and low consumption” mainly refers to high absorption and low energy consumption (that is, high regeneration performance).

In view of the high regeneration performance of tertiary amines, which can make up for the shortcomings of MEA in this regard, mixed amine (MEA / tertiary amine) absorbents composed of MEA and tertiary amines have attracted widespread attention.

CO2 saturated rich solution was used for the regeneration experiment at 110 ℃. When the outlet flow rate was lower than 5 mL/min, the experiment was stopped.

Moreover, MEA has only one temperature peak (heat generation), which indicates that its absorption of CO2 is a chemical reaction that generates a more stable carbamate, and therefore the absorption rate is fast. H2O acts as a base to catalyze the reaction.

The pH of 2 mol / L MDEA, DMAE and DEAE absorbent was measured below 13.0. Studies have shown that for a tertiary amine solution with a pH value lower than 13.0. The absorption of CO2 mainly uses a pair of lone pairs of electrons of the N atom on the amine molecule to form a hydrogen bond between the free amine and water.

Enhancing the reaction between H2O and CO2 Activity, amine as a base catalyst to promote the hydration of CO2, the formation of unstable HCO3, so low heat, low degree of reaction, slow rate.

This is because H2O not only catalyzes MEA, but also absorbs CO2 by itself, the maximum load of tertiary amine on CO2 is 1 mol CO2/mol tertiary amine, but the measured value less than this value, one of the reasons is that the absorption reaction rate is too slow and the reaction is not completely caused.

Although the absorption load of the tertiary amine is higher than that of MEA, the initial absorption rate is too low to be suitable as an industrial absorbent alone.

Therefore, the initial absorption rate MEA / tertiary amine <MEA, the latter is reversed. Since the degree of reaction of MEA with CO2 is much higher than that of tertiary amines, the temperature change of mixed amines is similar to that of MEA.

At the beginning of absorption, the absorption of MEA / tertiary amine at the same concentration is less than MEA, but it is higher than MEA in the later period.

The absorption of MEA / tertiary amine is greater than MEA. MEA / MDEA is the highest, which is MEA. 1.13 times. The experiment also found that monoamine DEAE and DMAE have obvious foaming phenomenon when they absorb CO2, their mixed amines with MEA also have low foaming properties, while the mixed amines of MEA and MDEA do not foam.

The regeneration rate of the MEA/tertiary amine mixed system is much higher than that of the single-component MEA, which indicates that the energy consumption for the regeneration of the mixed amine is greatly reduced compared to the MEA.

3 Interaction between MEA and tertiary amine

Mixed amine absorbent liquids not only have the absorption characteristics of their constituent amines but also interact. Tertiary amines act as bases to catalyze the absorption of MEA, so there is an interaction between them. The interaction coefficient is calculated using an enhancement factor, which is complicated to calculate.

MEA and tertiary amine meet the requirements of the former and the latter, respectively, and are not suitable for industrial applications when used alone. If it is mixed, the absorption and regeneration are both increased, but the absorption rate and initial absorption are low, which is not conducive to industrialization.

(1) The absorption of CO2 by a single-component organic amine shows that MEA has a fast absorption rate, but regeneration is difficult, while tertiary amines have a low absorption rate and a long absorption saturation time, they have a high absorption capacity and are very easy to regenerate.

(2) The absorption amount and regeneration effect of the three MEA / tertiary amine mixed amines with MEA as the main absorption body are better than that of MEA, but the absorption rate is reduced.

Fluorine Uses || How Fluorine was Discovered || Why Fluorine is Most Reactive