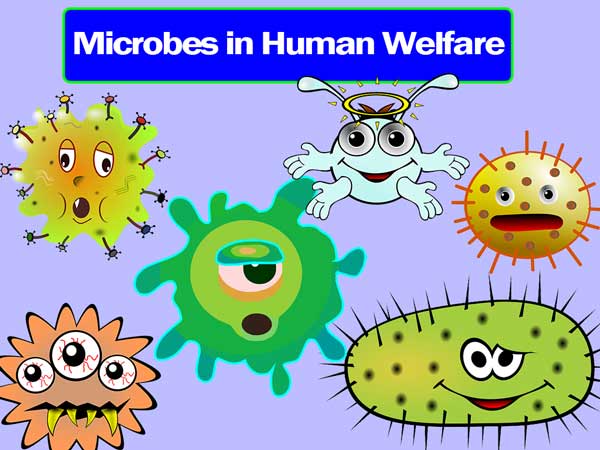 Those organisms which are not visible with naked eyes and viewed under the microscope are called microorganisms or microbes. These include bacteria, protozoans, yeasts, viruses, etc. we will discuss different types of Microbes.

The microbes are almost omnipresent (i.e., found everywhere). They are found in the snow, inside thermal vents (or inside geysers, high acidic habitats etc.) Some remain viable when cooled up to – 190°C.

Microbes are both useful and harmful to humans. They cause several diseases, can spoil food and used in many economical products. Here, we are concerned mainly with the beneficial effects of microbes.

A variety of microbes or products obtained from them are used in our daily life.

Curd is prepared by inoculating cream and skimmed milk with Lactobacillus acidophilus at a temperature of about – 40°C. There are different types of Microbes we are using in daily life.

Yogurt is produced by curdling milk with the help of Streptococcus thermophilus and Lactobacillus bulgaricus.

Buttermilk is an acidulated product that is formed by inoculating skimmed milk with starter culture of Streptococcus cremoris, S. lactis, Lactobacillus acidophilus, Leuconostoc species at 22°C for 18 hours.

It is probably the best-known cheese made from sheep’s milk. Camembert cheese employs Penicillium camemberti for ripening.

Numerous food items such as ‘dosa’, ‘idli’, ‘jalebi’ and ‘bread’ are prepared by fermentation process in which one or more kinds of microbes are used.

The ‘dough’ which is used for making dosa and idli is allowed to ferment overnight for 10 to 12 hours. The bacteria, which come from atmosphere (particularly Leuconostoc mesenteroides, Streptococcus faecalis) cause fermentation so that the dough increases in volume and gets sour. Increase in the volume of dough is due to carbon dioxide gas (CO2) that is released as a result of fermentation.

Bread is made from flour obtained by grinding cereal grain usually wheat. Selected strains of Saccharomyces cerevisiae grown on molasses are used as baker’s yeast. A small quantity of yeast is added to wheat flour and kneaded. The kneaded flour is kept at a warm temperature for a few hours. It swells up. The phenomenon is called leavening.

Today, a traditional drink of South India is made by fermenting latex obtained from toddy palm and coconut water. It undergoes fermentation with the help of naturally occurring yeast. It is a refreshing drink which can be heated to produce palm sugar (Jaggery).

Other foods like tempeh (Indonesia), tofu (Japanese) and sufu (Chinese) are fermented foods obtained from soybean.

Several types of sausages are prepared by fermentation and curing of fish and meat is also done with the help of microbes.

A variety of products in enormous amounts are produced by microbes such as – beverages (alcoholic and nonalcoholic), antibiotics, organic acids, enzymes, vitamins, hormones, amino acids, vaccines and steroids.

The fermented nutrient medium used differs based on products.

The yeasts which are used in the brewing industry for the preparation of alcoholic drinks are collectively called brewer’s yeast.

By-products of alcoholic fermentation are CO2 and ethanol.

Antibiotics are the chemical substances produced by microorganisms that in low concentration inhibit the growth or kill the pathogenic organisms without harming the host. The term “antibiotic“ (means against life) was coined by Waksman (1942).

It was commercially extracted by the efforts of Chain and Florey.

Fleming, Chain, and Florey were awarded Nobel prize in 1945.

Over 7000 antibiotics are known. Streptomyces griseus produces more than 41 antibiotics while Bacillus subtilis can give about 60 antibiotics.

Antibiotics are obtained from lichens, eubacteria, fungi, and actinomycetes.

Antibiotics are medicines used for treatment of a number of pathogenic or infectious diseases.

Single-cell protein (SCP) is the production of microbial biomass for consumption as human food or animal feed. The common SCP are Spirulina, yeast and Fusarium graminearum.

SCP is rich in high-quality proteins but poor in fat.

SCP is useful in reducing environmental pollution by managing industrial and agricultural wastes.

Chemicals, Enzymes and other Bioactive Molecules.

Acetic acid is produced from fermented alcohol with the help of bacteria, Acetobacter aceti.

Citric acid is obtained through the fermentation carried out by Aspergillus niger and Mucor species on sugary syrup.

Gluconic acid is prepared by the activity of Aspergillus niger and Penicillium species.

Cyclosporin A is an important bioactive chemical produced by the fungus Trichoderma polysporum. It is used as an immunosuppressive

Statins are produced by yeast Monascus purpureus. It acts as competitive inhibitor of enzyme for cholesterol synthesis. So, it is used as a blood cholesterol-lowering agent.

Enzymes are proteinaceous substances of biological origin which are capable of catalysing biochemical reactions without themselves undergoing any change.

Pectinases are enzymes obtained commercially from Byssochlamys fulva. Along with proteases they are used in the clearing of fruit juices and also in retting of fibers and preparation of green coffee.

Lipases are lipid dissolving enzymes that are obtained from Candida lipolytica and Geotrichum candidum. Lipases are added in detergents for removing oily stains from laundry and also used in flavoring cheese.

Streptokinase (Tissue Plasminogen Activator or TPA) is an enzyme obtained from the cultures of some hemolytic streptococci. It has a fibrinolytic effect, therefore it helps in clearing blood clots inside the blood vessels.

Yeast (Saccharomyces cerevisiae) is used for commercial production of ethanol.

Sewage or municipal waste contains human excreta and other organic wastes. It also contains a number of pathogenic microbes, so it should not be passed into rivers, streams and other water bodies. It is made less polluting by passing it through sewage treatment plants (STPs).

Microbes in Production of Biogas

Biogas is a methane-rich fuel gas produced by anaerobic breakdown or digestion of biomass with the help of methanogenic bacteria.

The most important microbes involved in the production of biogas are – methanogenic archaebacteria and Bacillus etc. The energy released from biogas depends upon the proportion of methane present in it.

Biogas is commercially produced inside the biogas plants. Each biogas plant consists of a deep (10 – 15 ft) concrete tank covered by

Floating lid. It is fed with a mixture of dung (commonly called gobar) and water (1: 1).

Cattle dung is a rich source of cellulosic material from plants. After filling the slurry of the dung, the biogas tank is covered by a floating lid which keeps on rising as the gas is produced from the slurry. The microbial activity in the slurry of dung results in the release of biogas.

Biogas is allowed to pass through an outlet pipe which is connected with the supply line. The leftover slurry is removed through another outlet that can be used as fertilizer.

Biogas is used as fuel for heating, cooking, and lighting. It is considered an eco-friendly and pollution-free source of energy.

Biocontrol agents refer to the use of biological methods for controlling plant diseases and pests.

Baculoviruses are pathogens that attack insects and other arthropods. The majority of baculoviruses used as biological control agents are of the genus Nucleopolyhedrovirus. These viruses are excellent candidates for species-specific, narrow spectrum insecticidal applications. They have been shown to have no negative impacts on plants, mammals, birds, and fish or even on non-target insects. This is especially desirable when beneficial insects are being conserved to aid in overall integrated pest management (IPM) program, or when an ecologically sensitive area is being treated.

Biofertilisers are widely used in organic farming. Organic farming is the technique of raising crops through the use of manures, fertilizers, and pesticides of biological origin, resistant varieties, crop rotation, intercropping, etc.

Biofertilizers are organisms that bring about nutrient enrichment of the soil by enhancing the availability of nutrients like nitrogen and phosphorus to the crops.

Biofertilizers increase the yield of plants by 15-35%.

What is Urea || How to make Urea Fertilizer, || Urea uses