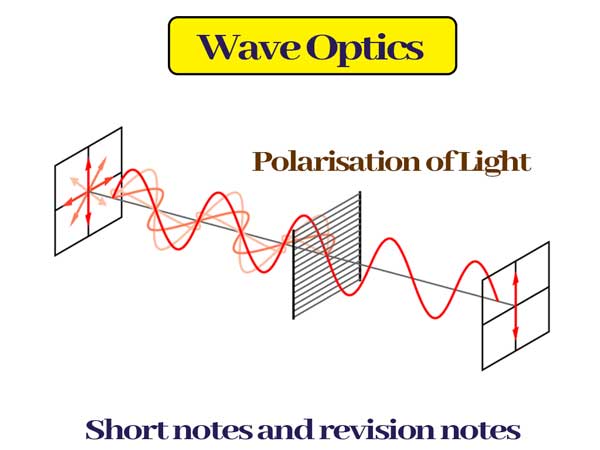 The locus of all particles of the medium vibrating in the same phase at a given instant is known as a wavefront. Depending on the shape of sources of light, wavefront can be of three types

Spherical wavefront: When the source of light is a point source, the wavefront is spherical.

Cylindrical wavefront: When the source of light is linear, the wavefront is cylindrical.

Plane wavefront: When the point source or linear source of light is at very large distance, a small portion of spherical or cylindrical wavefront appears to be plane. Such a wavefront is known as plane wavefront.

According to the Huygens principle, every point on the given wavefront (primary wavefront) acts as a fresh source of new disturbance, called secondary wavelets.

– The secondary wavelets spread out in all directions with the speed of light in the medium.

– A surface touching these secondary wavelets tangentially in the forward direction at any instant gives the new (secondary) wavefront at that instant.

Conditions for sustained interference of light: The two sources should continuously emit waves of the same wavelength or frequency.

– The amplitudes of waves from two sources should preferably be equal.

– The waves emitted by the two sources should either be in phase or should have a constant phase difference.

– The two sources must lie very close to each other.

– The two sources should be very narrow.

Young’s double-slit experiment was the first to demonstrate the phenomenon of interference of light. Using two slits illuminated by a monochromatic light source, he obtained bright and dark bands of equal width placed alternately. These were called interference fringes.

A soap film or a thin film of oil spread over water surface, when seen in white light appears colored. This effect can be explained in terms of the phenomenon of interference.

It is the phenomenon of bending of light around corners of an obstacle or aperture in the path of light.

The Polarisation of Light

The phenomenon of restricting the vibrations of light (electric vector) in a particular direction, perpendicular to the direction of wave motion is known as the polarisation of light.

The angle of incidence for which an ordinary light is completely polarised in the plane of incidence when it gets reflected from a transparent medium.

According to the law of Malus, when a beam of completely plane-polarized light is incident on an analyzer, the resultant intensity of light (I) transmitted from the analyzer varies directly as the square of the cosine of the angle (q) between the plane of transmission of analyzer and polariser

According to Brewster’s law, when unpolarised light is incident at a polarising angle (ip) on an interface separating a rarer medium from a denser medium of refractive index m, such that m = tan ip then light is reflected in the rarer medium is completely polarised. The reflected and refracted rays are perpendicular to each other.

Chlorine Gas Test || How Does Chlorine React with Water