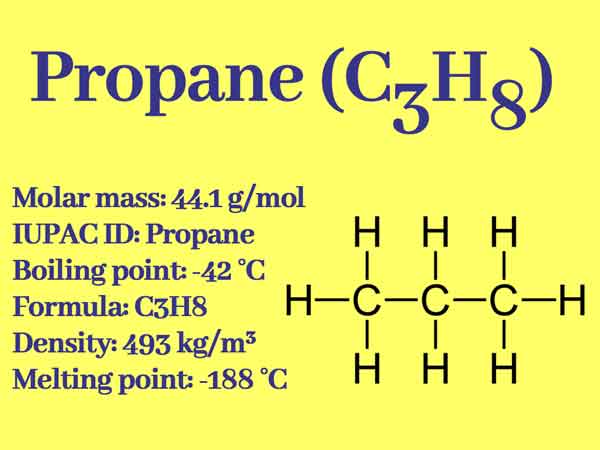 Propane, three-carbon hydrocarbons, the chemical formula of C3H8, Simple structure is CH3CH2CH3. It is usually gaseous but is usually transported after being compressed into a liquid state.

After processing crude oil or natural gas, propane gas can be obtained from refined oil. Propane is often used as a fuel for engines, barbecue foods, and domestic heating systems.

Molecular structure: C atoms are bonded with sp3 hybrid orbitals, and the molecules are polar molecules.

Relatively insoluble in water, it is easy to form solid hydrates with water at low temperatures, causing blockage of natural gas pipelines.

Propane is sensitized with excess chlorine gas at a higher temperature to generate carbon tetrachloride and tetrachloroethylene Cl2C=CCl2,

reacts with nitric acid in the gas phase to produce 1-nitropropane CH3CH2CH2NO2, 2- A mixture of nitropropane (CH3)2CHNO2, nitroethane CH3CH2NO2 and nitromethane CH3NO2.

Upper propane can be separated from oilfield gas and cracked gas. Can be used as raw materials for producing ethylene and propylene (C3H6) or solvents in the refining industry, propane, butane (C4The mixture of H10) and a small amount of ethane can be used as a civilian fuel after liquefaction, that is, liquefied petroleum gas ( LPG ).

Like other alkanes, propane can be burned under sufficient oxygen to produce water and carbon dioxide.

When oxygen is insufficient, water and carbon monoxide are formed.

Unlike natural gas, propane is heavier than air (about 1.5 times that of air). In its natural state, propane falls and accumulates near the surface. Under normal pressure, liquid propane will quickly turn into steam and become white due to the condensation of water in the air.

Propane is non-toxic under standard conditions, but if used as an inhalant, there is a danger of suffocation due to lack of oxygen. It is also worth noting that commercial products often contain other hydrocarbons that can cause danger.

Under normal pressure, the rapid volatilization of propane and its mixture can cause frostbite. In the case where the external temperature is 20 degrees Celsius, the propane liquid still maintains a low temperature of -42 degrees.

LPG burns cleaner than gasoline but slightly worse than natural gas. Due to the CC single bond and the double bond in propylene and butene, the combustion of liquefied petroleum gas usually produces organic waste gases other than carbon dioxide and water. It is also the reason for these bonds that there is a visible flame in the combustion of LPG.

Explosion hazard: This product is flammable.

Toxicity characteristics: Propane is a mildly toxic agent. It is pure anesthetic. It has no irritation to the eyes and skin. Direct contact can cause frostbite.

[Dangerous characteristics] Flammable gas. Mixing with air can form explosive mixtures, and there is a danger of burning and explosion when encountering heat sources and open flames. Violent reaction in contact with oxidants. The gas is heavier than air and can spread to a relatively low place at a lower place. It will ignite when it meets a fire source.

[Firefighting method] Cut off the air source. If the gas source cannot be shut off, the flame at the leak shall not be extinguished. Spray water to cool the container, if possible, move the container from the fire to an open area. Fire extinguishing agent: mist water, foam, carbon dioxide, dry powder.

[Emergency treatment] Quickly evacuate personnel from the leaked contaminated area to the upper reaches and isolate them, and strictly restrict access Cut off the fire. It is recommended that emergency handlers wear self-contained positive-pressure respirators and antistatic work clothes.

Cut off the source of the leak if possible. Cover the sewer, etc. near the leak point with an industrial cover or absorbent/absorbent to prevent gas from entering. Reasonable ventilation to accelerate diffusion. Spray water is diluted and dissolved.

Construct a large amount of wastewater from dikes or pits. If possible, send the leaked air to an open area with an exhaust fan or install a suitable sprinkler to burn it. The leaking container should be properly handled, and used after repairing and inspection.

1. It can be collected as petroleum gas during petroleum extraction and refining. During the cracking and catalytic cracking of petroleum fractions, a large amount of propane is also formed. Therefore, the impurities that coexist with propane include methane, ethane, butane, ethylene, propylene, and low boiling point sulfides and water.

2. During the refining, the gas produced during the distillation and cracking of petroleum is concentrated by methods such as oil absorption, activated carbon adsorption, compression and cooling to liquefy it, and fractionation at low temperature or pressure to separate propane. Unsaturated components such as propylene can be removed with concentrated sulfuric acid or hydrogenated.

The sulfur-containing compound can be washed with an alkali or removed with a desulfurizing agent. The water is dehydrated with concentrated sulfuric acid, ethylene glycol, solid desiccant (such as white clay, alumina) and sodium metal, etc., and can also be removed by azeotropic distillation. Propane is generally recovered by distillation. It can also be recovered by absorption of high-boiling hydrocarbons or adsorption with an adsorbent.

Hydrocarbon impurities such as an alkane, n-butane, isobutene, etc., then enter the condenser to condense propane into a liquid and separate it from non-condensable gases such as nitrogen and oxygen. The extraction rate of propane can reach more than 80%.

Propane is often used as fuel for barbecues, portable stoves and motor vehicles.

Alkanes are often used to drive trains, buses, forklifts, and taxis, and are also used as fuel for heating and cooking in RVs and camping. In some rural areas in North America, propane is used to fill heat-generating appliances such as stoves, water heaters and cell phones. As of 2000, 6.9 million American households had propane as their main fuel.

Commercial “propane” fuel, or liquefied petroleum gas, is impure. In the United States and Canada, the main ingredients are 90% propane plus up to 5% butane and propylene and odorants.

This is a domestic standard in the United States and Canada and is usually written as the HD-5 standard. It should be noted that liquefied petroleum gas prepared from methane (natural gas) does not contain propylene, and only propane obtained from the crude oil refining process contains. Similarly, in some other countries, such as Mexico, the standard content of butane is relatively high.

Other uses of propane include:

Acetyl chloride: How do you make Acetyl Chloride? | Properties | Uses