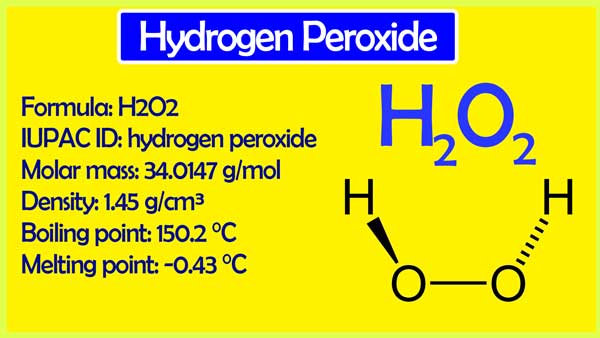 Thenard first created Hydrogen Peroxide H2O2 in 1818 by the action of dilute Hydrochloric on Barium peroxide.

Hydrogen Peroxide(H2O2)is found in a very small amount of rainwater and the atmosphere.

Thenard found that if 17 parts of H2O2 are decomposed, by weight, 8 parts of oxygen and 9 parts of water are obtained. Based on this, its proportional formula is HO. Its vapor density is 17 so its weight is 34. Thus its formula is H2O2.

According to Kingjet, it is an oxidized product of water and its composition is the formula I.

According to Boyer, it is reduced production of oxygen and its structure is formula II.

H2O2 is a tautomeric mixture of the following two formulas based on evidence in favor of the sources of Kingjet and boyer. At normal temperature, H2O2 remains in this mixture, mainly in the form of formula II.

With the help of an x-ray, it has been found that its four atoms do not exist in one place. And its structure is like an open book.

The following are the methods of making H2O2.

In the laboratory, it is made by the action of dilute H2SO4 on sodium peroxide.

In a flask, sodium peroxide is slowly added to the solution of dilute H2SO4.H2O2 is formed by the reaction. Who lives in the solution. Crystals of sodium sulfate(Na2SO4.10H2O) are obtained upon cooling the obtained mixture. Sodium sulfate is also called Glauber Salt.

The Glauber filters the salt and separates it. A 20% solution of H2O2 is obtained in the filtrate. 20% solutions of H2O2 are also called Perhydrol.

Hydrogen Peroxide is obtained from the action of cold water such as ice on sodium peroxide.

In this method, a hard surface is formed in the flask due to the formation of insoluble Barium sulfate or Barium phosphate. In which this reaction is carried out. This causes the reaction to slow down. This is a drawback to this method.

The industrial manufacture of H2O2 can be achieved by steam distillation at a low pressure of Perdisulphuric Acid. About 30% solution of H2O2 is obtained by this method.

In this method, ammonium sulfate and dilute sulfuric acid solution are electrolytic. In electrolytic, hydrogen is obtained at the cathode and Ammonium persulfate ((NH4)2S2O8) at the anode.

H2O2 is obtained by distillation of Ammonium persulfate with dilute sulfuric acid at low pressure.

Pure H2O2 is a colorless odorless thick and transparent fluid. In large amounts, its color appears to be light blue.

It is soluble in water, ether and alcohol.

This puts blisters on the skin.

Aluminium Element | what is Aluminium Toxicity | What Aluminium is Used For