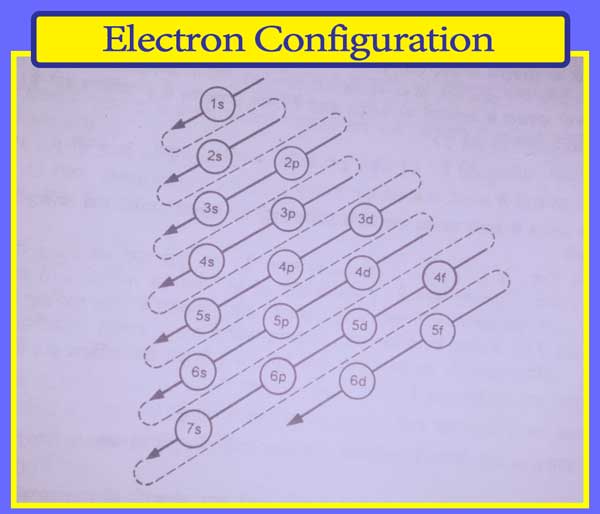 Electron Configuration: Aufbau is a word of german language. It is not a scientist’s name. It means building up.

The electrons in the subshell of atoms fill according to the Aufbau principle.

Electrons enter the subshells of atoms in the increasing order of energy.

The following is the increasing order of energies of the subshells of atoms:

The number before s, p, d, and f word is the main quantum number of electrons of its subshells.

It is also called the serial number of shells or shells of atoms.

This is the easy way of remembering the increasing order of energies of the atoms’ subshells.

A number of electrons in a subshell is demonstrating as a given example:

The actual electronic configuration of the elements is done by a detailed mathematical solution of their chemical properties, spectrum properties, and the Schrodinger wave equation.

So chromium(Cr) has 5 electrons in its 3d subshell.

In this Fe example, we can write given two type

Electron configurations of elements are also sometimes written in brief form. Only the number of electrons is displayed in the shells in brief form.

According to this rule, the electron enters the subshell first, for which the value of n + l is low.

If n + l is equal for two subshells, electrons enter the first of these two subshells which the value of n is low.

IUPAC Name : How to find the IUPAC name of compounds.

What is the formula of sugar? || Sugar Compounds